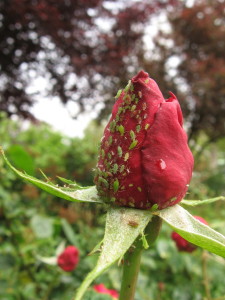 Nothing says spring like a rosebush full of aphids, an insect with an amazingly complex life-cycle. Eggs laid by adults overwinter on plants and batches of mostly female aphids hatch in spring and summer. These females eat and grow (sucking plant sap and producing sticky honeydew) and then give birth to live, wingless young, a process also known as cloning! (At this stage of the game, there is no need for males in the mix). As the population explodes, the aphids begin to run out of food, so the female aphids next give birth to live, winged males and females who fly off to newer “pastures” to begin the task of overpopulating an area all over again.

The sticky honeydew is a favorite of ants, who act like mini-farmers and protect the aphids from predators (such as ladybugs). Often gardeners think the ants eat plants, but really the ants are busy taking care of their “herd” and using the “milk” for food.  You can get rid of ants by using a sticky product called “tanglefoot” and applying it as directed. The ants get trapped or can’t go around the barrier to get to the aphids.  This leaves the aphids defenseless against predators such as ladybugs (actually beetles from the order Coleoptera) who are on the lookout for a tasty meal.  Ladybugs are more correctly called ladybird beetles or lady beetles, but the name ladybug is most commonly used. To learn more about other insects in this order, visit the coleoptera webpage. 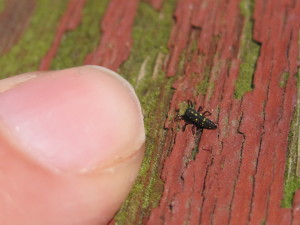 bugs lay their eggs on plants near aphids and other food sources like mites. Ladybug larvae are pretty interesting looking, almost like mini-alligators, and just as voracious! I took a photo of this little guy on a picnic bench just today. When this baby hatched it was smaller than a pinhead! You can barely see them with a hand lens.

Hatched larva eat tiny critters like mites until they are big enough to eat aphids. If you’re reading along and wondering why I write “larva” sometimes and “larvae” at others it’s because one is singular (larvae) and the other plural (larva) although even I get confused while I’m typing at times, especially late at night. 🙂 The larva eat and eat and get bigger and bigger.

Here’s a photo of a ladybug larva that has been chowing down and gotten much larger. I try to be careful when photographing them. The tiny ones shouldn’t be handled because they get squished easily. The larger ones can sometimes be convinced to climb onto a finger and are easier to handle. I’ve noticed that they bite, although I would call it more of a “nip” if you will, sort of like a little pinch.  It also seems like they emit an orange substance when disturbed, although I haven’t been able to find information about this anywhere. In nature, ladybugs are avoided by most predators, apparently because they taste terrible. Although I’m sure most birds or other predators eat at least one before they find out! 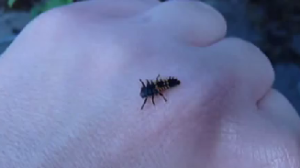 It’s truly incredible how a creature too small to see with the naked eye gets to be a nice-sized ladybug. One ladybug larvae can eat 300-400 aphids before it’s ready to pupate. After this huge smorgasbord, the larvae attaches itself to a leaf and then appears to “rest” for a few days. During this stage, it undergoes metamorphosis, an amazing process in which the insect completely transforms. The outside turns orange with black spots, and eventually the skin splits to reveal a brand new ladybug. It will look soft and pale for several hours until the outside wings dry and harden. As the shells hardens, it gets darker and turns to a beautiful, shiny red color.

There are different types of ladybugs, some with many spots and others with none. The shades of red also vary. This Ladybug Classification webpage can tell you more. The most common type of ladybird beetle is the convergent ladybug, which is pictured in this blog.

Want ladybugs in your garden? Plant crops that attract aphids. Some suggestions are plants in the cabbage family (cabbage, broccoli, cauliflower) or roses. The photos of adult ladybird beetles, larva and pupae were taken of the beetles among fava beans. I imagine it’s a great crop/place to overwinter during both winter and spring. It was definitely an “all-you-can-eat” buffet for the beetles!

Unfortunately, it’s impossible to get rid of all the aphids in your garden and have a pest-free environment. Which makes sense when you think about it, because if your garden is pest-free, what will the ladybugs eat? To reduce large numbers of aphids, you can spray them with a gentle stream of water, which will knock them off and kill many. Or you can use a horticultural oil or soap. Just remember that although these products are labeled “non-toxic” or “safer” they will also kill beneficial insects like ladybugs and bees. These products can also harm plants if applied when temperatures are over 80 degrees. Read the label and use correctly.

If you’ve never seen ladybug larva or pupa in your garden, get outside immediately and go look! Now that you’ve seen a photo of them, they’ll be much easier to spot. Happy hunting!