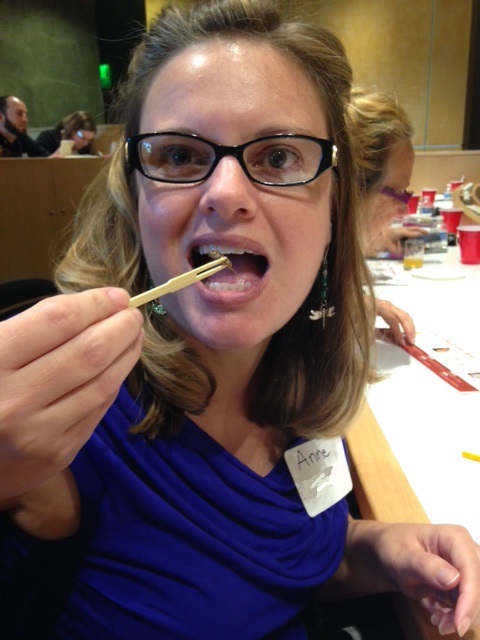 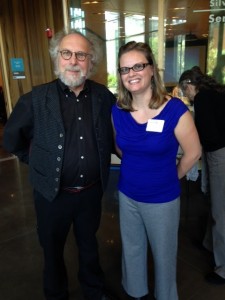 I was very happy to have my friends Javier and Jill-Marie in attendance with me at a Bugs and Beer event. Javier was an experienced bug eater (he’d tried them in Cambodia), and although Jill-Marie had no intention of eating bugs, she would drink the beer I couldn’t finish and be there for moral support.

The event was set in a small theater and would feature eight pairings of bugs and beer. Someone in the audience inquired why certain bugs were paired with certain beers, and the beer speaker joked that he really didn’t know since this was his first time doing such a thing and he had done his best trying to figure out which flavors would go best together. 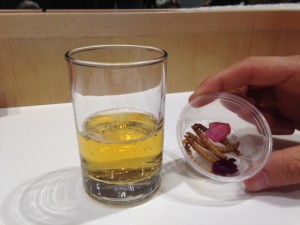 The first pairing was a small cup of meal worms decorated with flower petals and a Ruhstaller Gilt Edge Lager beer. I took a sip of the beer and stared at the pretty petals and tiny dehydrated worms, also called “larvets.” The fluorescent lighting of the room grew hazy and the background noise drifted away. This was the moment of reckoning. I popped a meal worm in my mouth. It was dry and lacked flavor. I tried another one with the same result. They reminded me of dehydrated veggie chips. Luckily the beer helped re-hydrate my throat. 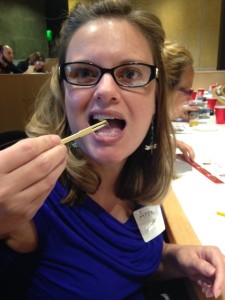 The next course was a sago worm, which is not a worm but rather the larval stage (called a grub) of the red palm weevil. I was looking forward to trying something a bit meatier than the larvets, and was disappointed to see the grub was dehydrated too! It came with a wasabi dipping sauce that was good and was paired with a Lagunitas Pils beer that helped wash away the chalky texture. Strike two!

The third pairing featured a plate full of European house crickets with a delicious Hefeweizen beer from Sudwerk. I speared a cricket with the tiny fork provided, put it in my mouth and started taking selfies. Then Javier and I took selfies together and took turns photographing each other with our crickets. We noticed everyone in the room was doing the same thing. As I tentatively tasted the cricket, I was pleasantly surprised to find the texture to be chewy yet crunchy. The crickets had been prepared in hot sauce that gave them a bit of a kick and a really good flavor. Things were looking up.

When the fourth pairing came out, a hush 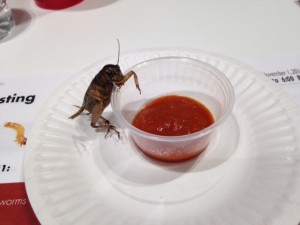 fell over the room. The waiters held platefuls of Cambodian crickets, an insect the size of a small mouse. I don’t recall the beer because I was staring at the cricket. Perhaps because I’m an insect mortician (my bug collection is very good looking), I started playing with my food by waving at Javier and talking to him with my cricket. He didn’t laugh at my jokes and then I noticed his face was quite red. Apparently he decided to pop the entire cricket in his mouth, chew forcefully and swallow. “I think there’s a leg stuck in my throat,” he whispered.  I felt bad for him.  Hours later I bought him a few drinks and he said by the second one his throat was starting to feel a bit better but he needed a third. 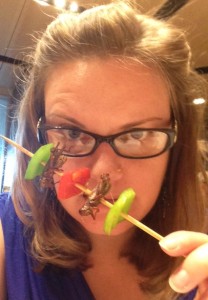 The fifth bug and beer pairing were grasshopper kebobs and bell peppers served with a Rubicon Angus Scottish Ale. The grasshoppers were my absolute favorite, they were flavored with teriyaki sauce and very tender. Javier and I were fighting over who got to eat Jill-Marie’s grasshoppers when I noticed my ale glass was empty. Jill-Marie had a big smile on her face.

For the sixth pairing, a spinach salad with queen weaver ants was served. The ants were dehydrated and the salad was rather bland. I didn’t really feel like I could taste the ants at all, which I have heard have a tangy flavor. The salad was served with a Sierra Nevada Boomerang IPA. IPA stands for India Pale Ale, aka. BITTER BEER, which some people really like. 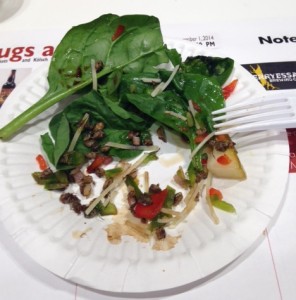 The seventh pairing was a dessert. The chef had made gingersnap cookies with cricket flour. Apparently there are several companies in the U.S. that make and sell items made with cricket flour. The gingersnaps were amazingly yummy and paired with a Heretic Chocolate Hazelnut Porter, and the two went really well together.

The final pairing were crickets dipped in chocolate. The crickets were saturated with oil and salt and did NOT go well with the chocolate. I can’t recall the beer either, but suffice it to say I ate Jill-Marie’s cookie and pretended it was the last course. 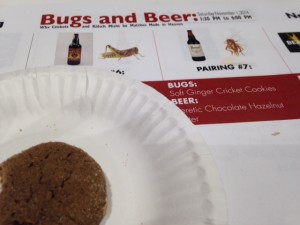 As we left the event, each of us commented on how much fun we had and that we would definitely do it again. Javier noted that he would take smaller bites of the Cambodian cricket.

Javier and I aren’t sure if we will eat bugs on our own. Jill-Marie bought me a copy of the Eat a Bug Cookbook which Chef David Gordon signed. If I do decide to venture into entomophagy again, I’ll make sure to post photos of my culinary adventures.

Please note: The Bug Chef does not advise eating insects that haven’t been raised specifically for eating, and he also advises against eating insects raw.