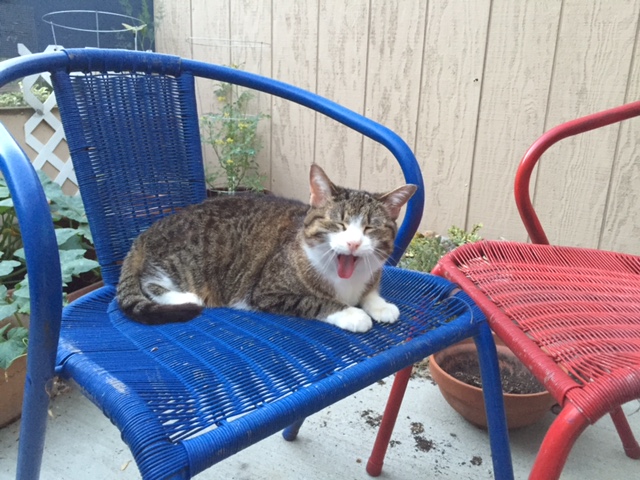 Inconceivable! Honestly, it was beyond tempting to do it.

Aren’t I cute? I would never use your containers as a bathroom,  I’m a refined house cat for gosh sakes.

After being sprayed with horticultural soap, some of my container gardening plants began to grow again and turn green. I killed the spider mites although I did have to make two applications, one week apart. Unfortunately, the beans did not recover from the spider mite destruction and died. Their leaves turned yellow, paper thin and crispy. I plan to replace them with something else that will climb up the lattice.

In other news, I must tell you something quite unexpected that has happened in my garden. My 16 year-old pet cat, Snuggles, (named by a three-year old) is my best furry friend and a total sweetie pie cat. She spends most of her time eating, napping and cuddling. However, not long after I planted my patio garden, I noticed she wasn’t using her indoor litter box very often. At first I was concerned that she wasn’t feeling well. Later I caught her using one of the patio containers as her litter box! I was shocked, let me tell you. Luckily she isn’t able to access my Cedarcraft planter, that would be unacceptable. 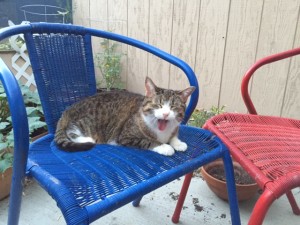 Since my Snuggles is a senior citizen cat and already does as she pleases, I decided to turn a blind eye. Okay, the real reason is because she (luckily) chose the container growing a pumpkin plant. And she is super spoiled and usually gets her way, because I’m a total softie.

Interestingly, within a few weeks, the difference between the size of the pumpkin plant and all of the other vegetable plants was quite pronounced. Soon after, I discovered  squash bees pollinating the flowers, and tiny ‘Jack Be Little’ pumpkins began to grow. However, it soon became apparent that the plant had outgrown it’s container. It began to wilt on a daily basis.

‘Jack Be Little’ normally needs 95 days to develop pumpkins, but already has two good-sized pumpkins on it that developed in less than half that time! Why? Well, did you know that urea is a common form of nitrogen fertilizer? And yes, you guessed it, urea also means urine. Fertilizing weekly with an all-purpose vegetable fertilizer is helpful for container plants, but nitrogen shouldn’t be applied to plants in large doses. I pretty much figured the pumpkin plant wasn’t going to make it. 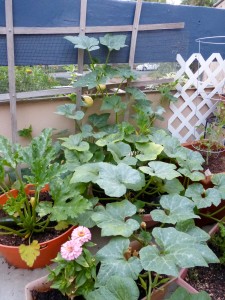 In the case of Snuggles, once the plant reached a certain size she could no longer use the container for a litter box, and started using the one inside instead. I’m doing my best to keep the pumpkin plant alive, I removed several branches and want to get the pumpkins to size so I can harvest them.

Squash like pumpkins and gourds are ready when the tendril growing next to the pumpkin turns brown. If you pick them too early, they will begin to rot. Cross your fingers, I hope these two pumpkins make it! Then they can hang around and look cute for Halloween. I may just draw kitty faces on them if they do. 🙂

Eggplant, love it or hate it?