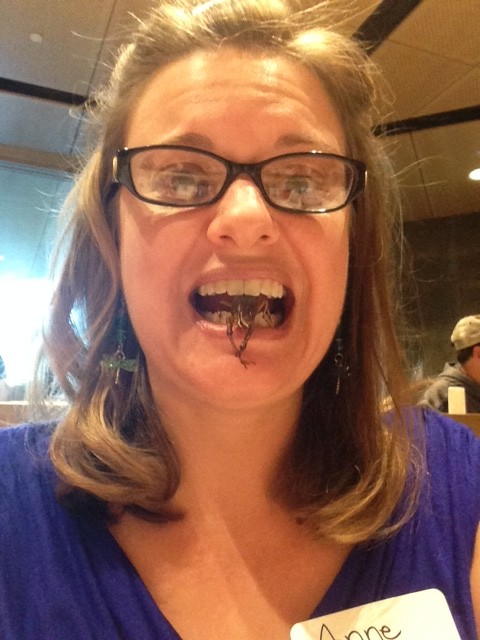 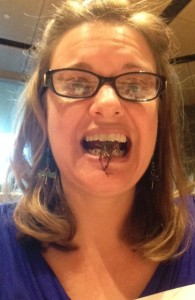 I was more than a little scared to eat this cricket.

Most people I tell about my bug-eating experience react with disgust. However, believe it or not, entomophagy, (the human consumption of insects* and arachnids) is practiced by over 80% of the world. EIGHTY PERCENT!

Why Bugs and Beer?
The advertisement for this event intrigued me. I’d collected bugs for over two decades and taught classes that mentioned entomophagy, yet I hadn’t tried it. For some reason I decided I should do so and immediately convinced two friends to come with me.

Nightmares
After I signed up for the class, I couldn’t stop talking about it. I had to tell everyone. I called friends to tell them, I told my family. My preoccupation with the upcoming event bordered on obsessive. I wondered, “would I be able to eat a bug? What if I couldn’t do it? What if I choked on the bug? What if a bug leg got stuck in my throat?” and dozens of other random thoughts.  I tried to think of ways to desensitize and prepare myself but nothing seemed to help. Also, I’m not much of a beer drinker, in fact it usually makes me sick, so I knew I couldn’t rely on alcohol to get me through my self-inflicted event.

Nightmare#1
My first nightmare was set in a darkly lit upscale restaurant that had a long oak table surrounded by stools and lots of well-dressed people. I couldn’t see their faces, but I heard them talking over loud music. Everyone was excited and holding chopsticks and forks in anticipation. The chef came out of the kitchen with a flourish and said “Voila!” and showed a plate with what appeared to be purple sea urchins that had been turned inside out and stuffed with something brown and fluorescent pink. Everyone clapped and I began to sweat profusely. I watched as the plate slowly made its way down the table…and then I woke up!

Nightmare #2
A few days later I had a second nightmare that was less scary. I had cooked artichokes for myself and a friend, and as I started to eat I found some live ants on mine. As I went to flick them off, my friend said, “Hey, shouldn’t you eat that? I mean, shouldn’t you practice?” I felt pressured and lifted an artichoke leaf up to my mouth, and stared into the eyes of a wriggling ant…and once again, I woke up.

Snail. These are next on my list of things to try.

Advice
I told one good friend about my upcoming experience and he said, “Anne, I’ve studied and collected bugs for over 45 years, but it would take a lot of beer to get me to eat one.  I did eat an escargot once (not an insect, but close enough), but only after about half a bottle of Cabernet Sauvignon.”

Another friend, (on Facebook), Confessions of a Bug Addict told me not to worry, and that once I tried bugs and realized they were delicious, it would make complete sense to eat them. I repeated this to myself several times day.

A few days before the workshop, I saw a video of Chef David George Gordon on Conan O’Brien. His antics made me laugh, and I started looking forward to meeting him and trying some of his cuisine. Although I did balk at the idea of eating a cockroach, even though Conan ate one.

*insects are six-legged creatures and also include the category of “bugs” which are a type of insect. Arachnids are spiders which have eight legs.