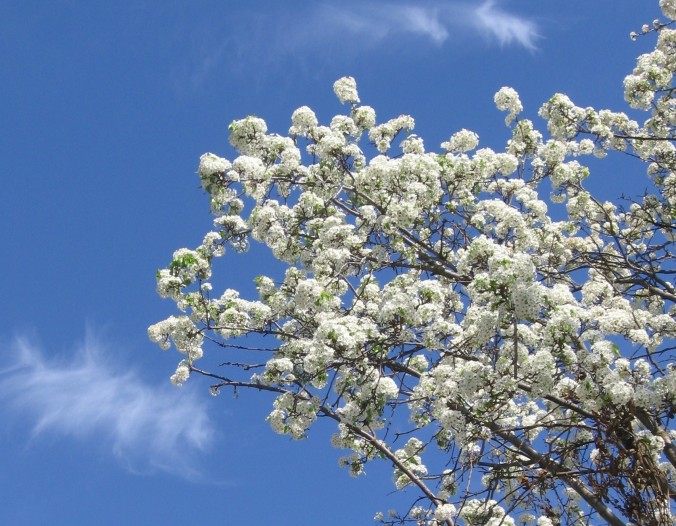 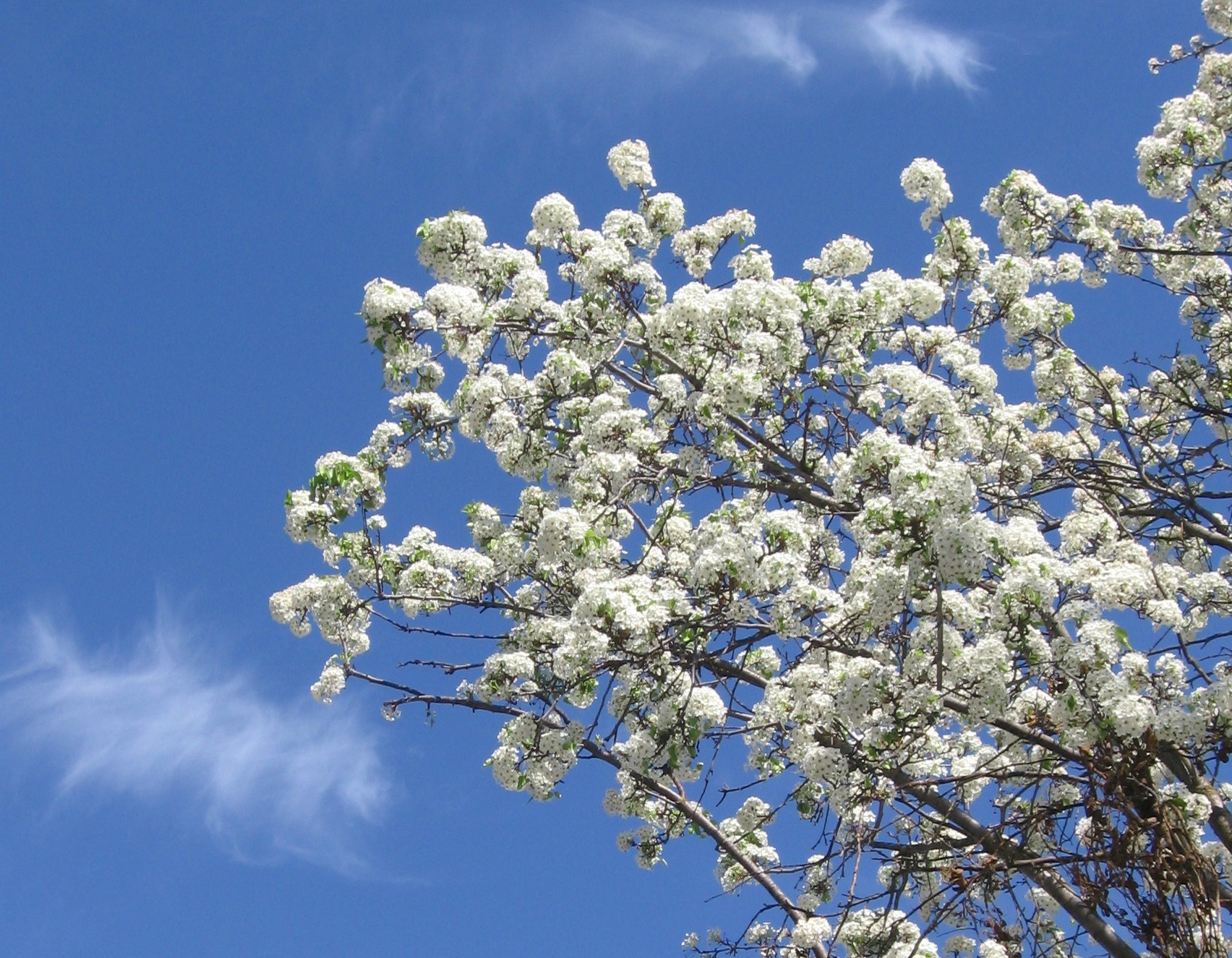 In late winter to early spring, the flowering pear absolutely bursts into the street tree scene. The white blooms are followed by shiny green foliage that stays on the tree until fall. Once fall arrives, the leaves turn shades of gold, purple and orange, and then drop to the ground.

Pear Problems: Not all flowering pears are created equal. In fact, you may be surprised to learn there are many varieties. Unfortunately, some of them are plagued by two major problems in the Central Valley of California: fireblight and broad-leaf mistletoe.

Fireblight is a bacterial disease spread from tree to tree by splashing water, insects and especially honey bees. The symptoms begin with infected flowers and stems turning black. The infection may spread from into twigs and branches. These blackened stems and branches stay on the tree, giving it the appearance of being scorched. There is no real “cure” except to remove damaged limbs, or replace trees with less susceptible varieties. Read more about fire blight. 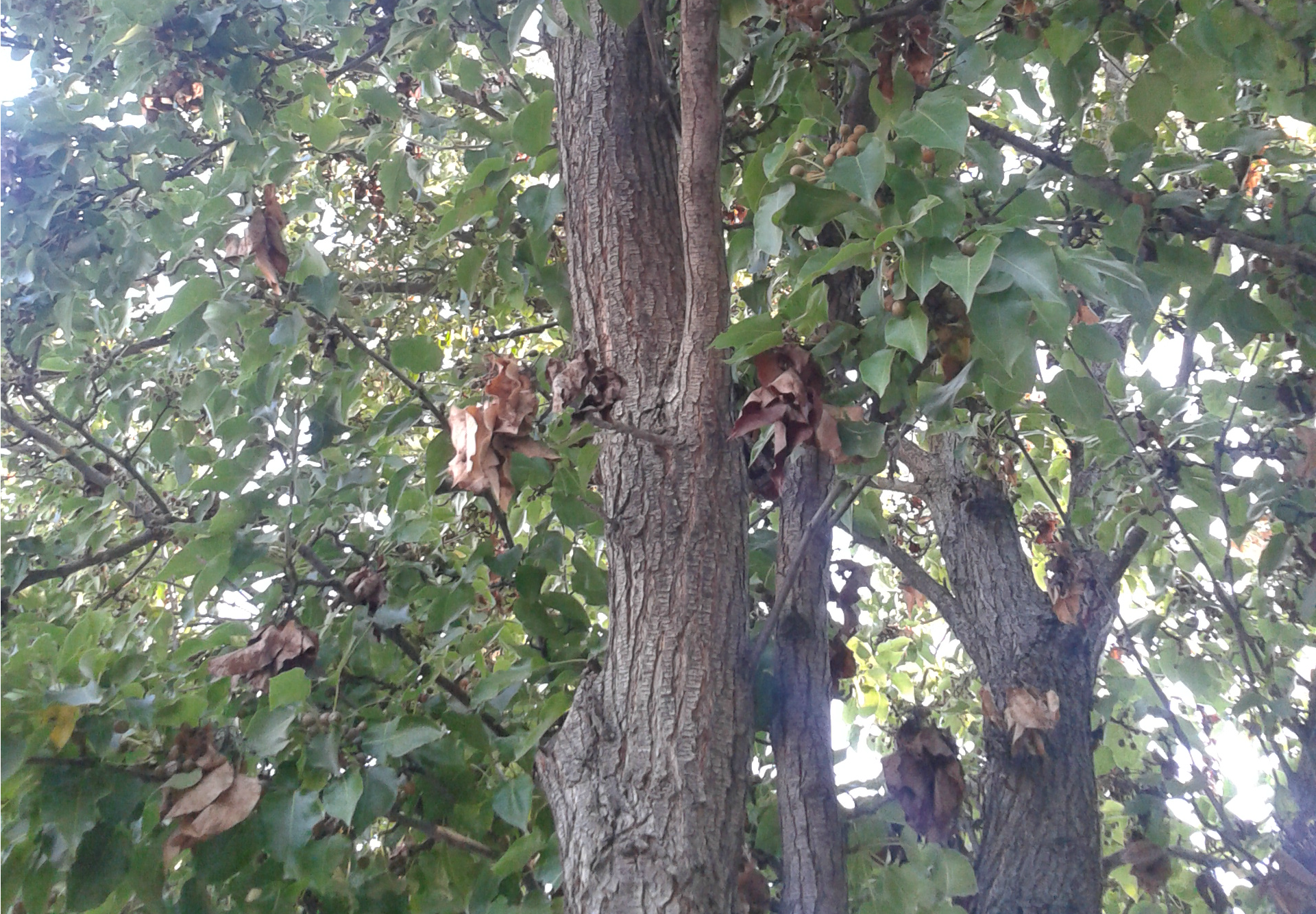 Broad-leaf mistletoe is famous for inspiring Christmas kisses, but in the landscape it’s a major pain for arborists in Western parts of the U.S. and especially the Central Valley. This evergreen, parasitic plant slowly takes over the water-conducting tissues of a tree. A healthy tree can tolerate a small amount of mistletoe, but trees already weakened by drought or other disease can become stunted and possibly die from an infestation. Read more about Broad-leaf mistletoe

Needless to say, dealing with both fireblight and broadleaf mistletoe is not an easy task, and on top of this many flowering pears produce fruit that can be quite messy near sidewalks.

Growers in tree nurseries often create problems when they “head” back trees (top off the main branch). This action results in a tree that responds to the cut by producing ½ dozen vertical branches that compete with each other from one point on the trunk. As you may imagine, all that pressure on one point eventually results in splitting due to bad weather.

When trees are pruned incorrectly, windy weather causes weakened limbs to easily break. Sometimes they fall on houses or cars and cause monetary damage. After a storm, if you drive down a street that has a huge tree limb in the middle of it, it’s quite possible the limb is from a flowering pear. If you have a young flowering pear, it’s important to prune it correctly so that it grows to be a healthy tree. Read Tree Training and Tree Pruning to find out more.

Pear Varieties: The first flowering pear introduced was Pyrus calleryana ‘Bradford.’ It has a pyramid shape and can reach 50′ tall and 30′ wide. It’s an attractive tree whose main drawback can be prevented if grown properly. Properly grown and trained P.c. ‘Bradford’ pears do not have this trouble. AND they do not suffer from fireblight or broad-leaf mistletoe. So if you want that white, attractive bloom in late winter/early spring, choose ‘Bradford’ over other deciduous varieties.

Luckily, flowering pears also have an evergreen choice- Pyrus kawakamii, which is not susceptible to broad-leaf mistletoe or fireblight, but does have small fruit that can be messy. If trained and pruned properly, it can take on a nice, pyramidal shape 15-30′ tall and wide.

So for the Central Valley of California, P.c. ‘Bradford’ and P. kawakamii are best. In other parts of the country, other varieties are better. Consult a local a nursery to find out which type works best for your climate.

To learn more about how to prune an older flowering pear tree, reading my Pruning Trees and Shrubs article.