Watch out for Poison Oak! 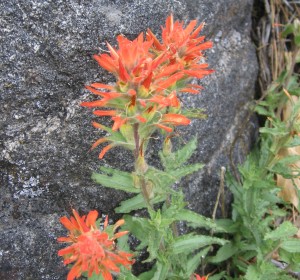 Warm weather is here, and it’s time to get out and explore nature (just be careful of poison oak!)  I’m a huge fan of both State and National Parks. This past weekend I explored Mount Diablo State Park, located near Danville, CA. It has the most breathtaking views! To get to the summit, hike 3 miles on an incline that varies from steep to only slightly graded. For those who cannot make such a hike, a drive will also get you there. The park is full of gorgeous California natives like coyote bush, Indian paintbrush, sticky monkeyflower, California poppy, manzanita  AND poison oak, which was ubiquitous! (Meaning everywhere.) I LOVE using that word. hehehe.

Where do you find Poison Oak?

Poison oak flourishes in the mountains and valleys of California below 5,000 feet (the park’s summit was a little above 3,000 feet). The saying “leaflets three, let it be” can help you avoid plants like poison oak, (or in other parts of the country, poison ivy and poison sumac). Some of the poison oak I spotted had the typical, shiny green leaflets of three, but others resembled oak tree seedlings. I was surprised to see some poison oak had almost burgundy colored leaves. Apparently, this sneaky plant is not only red in fall, but in spring too. It almost seems like it’s out to get you. So to be sure of what you touch, depend upon the feature of alternating leaflets of three. In botany, alternating means the leaves aren’t on stems directly across from each other (that would be called “opposite”) but alternate along the main stem on each side. 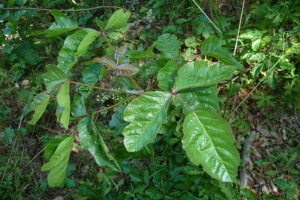 On some parts of the trail, poison oak grew over the path and could easily have brushed my arm or ankle if I hadn’t been careful. Due to budget cuts, park personnel can’t do everything and must rely on help from volunteers. You may want to consider joining the California State Parks Association, (I’m a member) to help support our Parks. Plus, I received a lot of great information and free parks passes for joining! You can also join volunteer groups that clear trails.

Toxicodendron diversilobum is the botanical name for poison oak. The first word loosely translated means “toxic poison. The second word refers to the diverse shape of the leaves, which often fool people. Interestingly enough, poison oak mostly affects humans. Many animals including horses, birds and goats eat it without any ill effects. Native Americans used it in cooking and medicine (as a wart remover) without constantly suffering its ill effects, and no one knows how they did this. 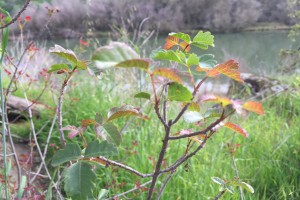 The oil coating on the leaves (urushiol) is not actually a “poison.” It’s an allergen that causes a reaction (skin rash) in about 80-90% of people¹. Effects are not immediate, and it can take hours, days or even weeks for symptoms to appear. The rate at which symptoms appear is directly related to frequency of exposure. This means the more times you are exposed, the quicker the symptoms appear, and they come back with a vengeance.

Interestingly enough, time off work for poison oak exposure is covered under workman’s comp for both firefighters and park employees. Aside from skin exposure, employees can suffer serious internal injuries (lungs/respiratory system) when when large stands of poison oak catch fire, if they breathe the smoke and soot. 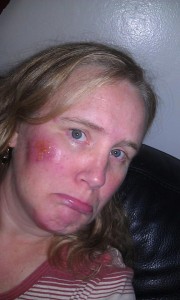 Be Prepared if you encounter Poison Oak

If you plan to hike, be on the lookout for poison oak. As a precaution, wear long sleeved clothing, tennis shoes and socks. Carry cold water and rubbing alcohol. If your skin comes into contact with poison oak, immediately apply rubbing alcohol over the skin, followed by lots of cold water. Do this within 5 minutes to prevent a rash². Even if more time has passed, use the rubbing alcohol to help prevent the rash from spreading and get rid of excess plant oil on your skin. If you have nothing else with you, use cold water to wash the oil off. Avoid warm water, which actually helps oil penetrate your skin. Soap can be used, but only with plenty of cold water or it too will help spread the toxin. Hand wipes should be avoided, as they also help spread the plant oil.

If a rash does develop, the symptoms will depend upon how much oil seeped into your skin. You may have a rash, hives, blisters, and itching which can last from 10 days to two weeks. I’m told the only thing you can do is suffer and wait it out. There are over-the-counter medicines, and if your case is severe you may want to see a doctor. Poison oak is not “catching.” If you get blisters, they may ooze, but this fluid is your own body’s making, and not associated with the plant oil. (Back when I was a teenager, a boy who had a “crush” on me wiped his gooey blistering ooze all over my arms. Needless to say I was not impressed…) 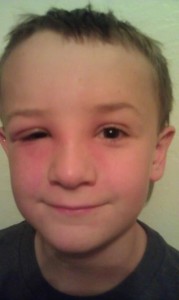 Heidi’s son had some bad swelling.

When I first wrote this blog I was in great need of photos afflicted people. Thank you SO much to Heidi Wittig Price for sharing photos of yourself and your son!!

In closing, don’t let the possibility of catching poison oak stop you from hiking. The world of nature awaits you, in all its magical, (and sometimes toxic) glory. And personally, I think it’s better to risk exposure to those sorts of things than to catch Nature Deficit Disorder!