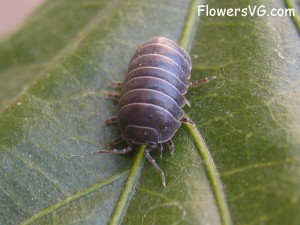 Thanks to two facebook friends for their bug questions that inspired this post! Robyn Grace Jennings:  Rollie pollies are eating all my plants and I’m a totally organic gardener. What do I do Anne? :'(

Anne of Green Gardens: Robyn, before taking action, let’s do a little detective work. Rollie pollies love moisture, so they are easy to spot when you water. However, it’s possible they aren’t the culprit. Cue the “Mission Impossible” theme song, it’s time to go under cover!

Find a flashlight, a wig and some dark glasses. Then, at dusk, sneak around your garden to see who’s out and about, chowing on your plants. Stand still, hold your breath, wait and watch. If not a creature is stirring, check hiding places like underneath a hose, the inside of irrigation boxes, wood piles, and any areas of moisture in your garden.

Roly polies are considered decomposers, so usually they prefer to chow on rotting material in your garden. (somebody’s gotta do it!) But everybody likes a yummy change sometimes…which means they may nom your newly planted seedlings…

Facebook Friend Stephen B. Clayton suggested putting out beer traps, to do this, check out blog post “Build Yer Own Beer Trap.”If you catch a lot of snails and slugs, you’ve found the culprit. If you catch mostly rollie pollies and possibly earwigs, you’ve got your perp/s.

As organic gardeners, our goal is not to decimate insect populations (cuz then the “good” bugs have nuthin’ left to eat) but to bring exploding populations back to a normal level. It’s normal in spring for lots of bugs to suddenly hatch and converge on your garden. Sometimes a few days or a week go by and the problem takes care of itself (this sometimes involves insect/bug cannibalism).

To kill soft bodied insects like slugs, snails, earwigs, and roly pollies (to mention a few) use diatomaceous earth. This naturally occurring substance wicks moisture from the body of the critter, causing it to dry out and die. As you may guess, diatomaceous earth doesn’t work well in wet areas, and should be reapplied after watering.

Even though a product is “organic” it should still be used with caution. Breathing in diatomaceous earth and/or getting it on your hands is not recommended. Also, diatomaceous earth is a mined substance so consider using it only when needed.

Please let me know if my blog post has helped you out! Or, answer one of these fun questions: